Nation of Victims: The Decay of the American Character - Diamondonenews
Skip to content 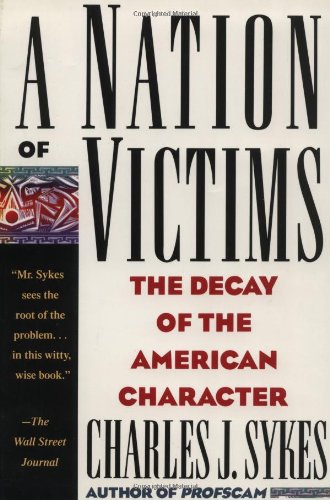 One of the most talked-about books in years, A Nation of Victims established Charles Sykes as a persuasive, witty, and controversial commentator on American life and society. The plaint of the victim– It’s not my fault— has become the loudest and most influential voice in America, an instrument of personal and lasting political change.

* Fired for consistently showing up late for work, a former school district employee sues, claiming he is a victim of “chronic lateness syndrome.”

* Videotaped puffing on a pipe filled with crack cocaine, Washington, D.C., Mayor Marion Barry claims he is a victim of racism.

In this incisive, pugnacious, frequently hilarious book, Charles Sykes examines the erosion of our society and offers hope in the prospect of a culture of renewed character.