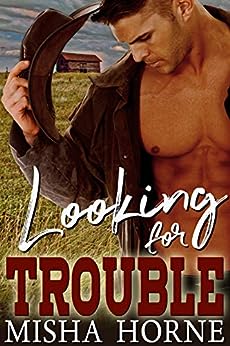 No matter how many times he tries to clean up his act, drinking and fighting and picking pockets are about the only things that make him feel good. All he wants when he boards a train headed for Nevada is a fresh start. He might not even know where it is on a map, but nobody knows him there. He just needs a little change, a little adventure, a chance to shake off the dark cloud he seems to be stuck under.

What he doesn’t expect is to meet Will Kaplan. A tall, handsome cowboy with a chiseled jaw who pulls him out of a jam five minutes after he steps off the train. He’s ever met anyone like the no nonsense stranger who offers him a temporary place to stay. Will might be stern and have a lot of strict rules, but he’s patient and fair, and he makes Jesse crave things he’s never thought about. Makes him want to cause trouble, just to see what might happen. Will makes him want to do all kinds of things that are definitely a bad idea.

Everyone he was ever close to is long gone, and he’s perfectly happy on his farm with his animals and just enough to get by— alone. He only heads into town when he has to, and sure never expected to come back home with a mouthy stranger who seems dead set on driving him crazy.

Will doesn’t need a farmhand. He definitely doesn’t need one who’s stubborn and reckless and has an ugly temper, even if he’s sexy as hell. Just because Jesse is good company when he isn’t being irritating doesn’t mean Will is interested in having another person in his life for more than a week or two. Excitement and disruption are not things he’s fond of. Just like he’s not fond of this sassy, sullen city boy who seems determined to cause trouble, almost like he’s begging for a firm hand…

*To be clear, this book is not a heavy historical filled with angst or a rollicking shoot em up western. It’s a sweeping, swoony escapist historical about two men falling in love on a secluded farm in 1888.*

Cheap Flights: How To Get Affordable Tickets For Your Holiday

Forgiving What You Can’t Forget: Discover How to Move On, Make Peace with Painful Memories, and Create a Life That’s Beautiful Again

Cheap Flights: How To Get Affordable Tickets For Your Holiday