Why? Because We Still Like You: An Oral History of the Mickey Mouse Club - Diamondonenews
Skip to content 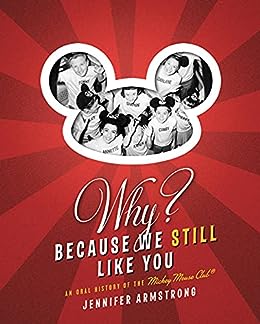 Full of nostalgia, this book gives you the never before told story of how The Mickey Mouse Club paved the way for all that came after, from its humble beginnings as a marketing ploy, through its short but mesmerizing run, to the numerous resurrections that made it one of television’s first true cult hits—all through the recollections of those regular kids-turned-stars who made it a phenomenon.

It will reveal, for the first time ever, the stories of Annette, Darlene (and her famous rivalry with Annette), Cubby and Karen, Bobby and the rest of the beloved cast. It will explore, through the reminiscences of former fans who grew up to be some of television’s finest minds, what made the show so special. Finally, it will examine why the formula the creators of the show invented is more relevant than ever, and whether we’ll ever see yet another Club for a new generation.

Take a trip down memory lane with the original Mickey Mouse Club cast and creators, through drama and unexpected fame, to see how a television institution came into being.

“Armstrong tracks down most of the original Mouseketeers, and some also-rans, who share with us a behind-the-scenes look as to what it was really like to go from ordinary to idolized in a matter of weeks.” —The Florida Times-Union

“[An] oral history of the TV show that helped shape the Baby Boomers . . . a captivating cautionary tale.” —Booklist

The Only Game in Town: Baseball Stars of the 1930s and 1940s Talk About the Game They Loved (Baseball Oral History Project Book 1)

The Song of the Lark Illustrated